Tragic destiny of the Blagoveshchensk temple in Harbin

To be born Russian, to remain Russian
And save this happiness,
When and wherever to wander
Such as grandfathers ,to lay down in earth.
Nikolai Yevseyev

Russian immigrants  builders of the Chinese Eastern Railway (known in Russian as KVZhD) and a big wave of refugees in civil war, having come to be in foreign land in Manchuria, aspired to keep Russian way of life, to maintain Russian traditions and to continue orientation of people in Russian spirit. Rallying went around the Orthodox Church which helped to inform the young generation born there, high morals, to impart love to all Russian and first of all to Russia. Despite of all burdens, pain of loss, melancholy for the lost motherland, Russian Orthodox Church has rallied and has helped to survive and generate Russian society abroad united by belief and love to Fatherland. In temples one could feel the breath, the atmosphere of Russia and people were seeking them.

The priest Fr Cyril Zajtsev recollected that time:  Russia gone to nonexistence Russia, a piece of her continent, small island, from side hardly noticeable, hanging above Bolshevik sea, which has flooded Atlantis of Historical Russia. Here, is what we have found in Harbin … Here emigration hit on the ground of happy Croatia, (much like Russia) has settled down in it, as at home,  so that is how unique Harbin came to be, with its unforgettable household background of Russian boys and girls, Russian old men and old women, cozy benches, numerous churches and united people … (the Russian emigration in the Far East. Vladivostok, 2000. p. 119).

In Harbin annals has entered as a bright page the Russian architecture, which was especially shown in construction of the Orthodox churches, which became colorings of the city for many years. For the period from the beginning of construction of KVZhD and till 1945 there were built in Manchuria more than 60 temples, 22 in Harbin.

One of the last was erected the biggest in Harbin temple of Annunciation (Blagoveshchensk) with capacity of 1200 persons. It was located in very crowded place on Police Street. Close there was situated a very lively, sparkling with lights and abounding with shops, luxurious Chinese Street. Near the temple there was a final stop of the trams going from New Town (Novi Gorod) to Majiagou. On the other side there was a green oasis of the city garden, and the temple was buried in verdure of the trees growing inside its fencing. Not far from the temple, the abundant with water, Songhua River, was flowing. The melodious ring of its bells was carried above wide open spaces of the river waters.

In the winter for the Christening from the temple religious procession with icon banners and church chanting went to "Jordan" when thousand of believers went down to ice of the Songhua River for prayers of blessing of waters to installed near big ice font cross and altar table. Here the mystery of consecration of water was carried out, here flocked the Orthodox people of the city for the Holy water, and some people plunged into the ice font.

In the temple sang a good church choir, sounding of which under the arches with magnificent acoustics was beautiful. Many regents have been educated in pre-revolutionary Russia, such as by K. N. Soroka, F. U. Selin, S.V. Melnikov, under which direction sang the chorus of the church of Annunciation. Elizabeth Nikolaevna Popova (Saurova), living nowadays in Chelyabinsk, sang in the temple solo (mezzo-soprano) with regent Victor Ivanovich Fedotov before departure home. She recollects especially solemn Pascha divine services which were so loved by Harbin inhabitants. Before departure she has sung last Pascha in this temple, and remembers it till now. E. P. Taskina writes in her book Unknown Harbin:  Looking back through years, I think, that huge value in preservation of national roots of Russian Abroad has played this amazing, penetrating beauty of sacred music, choral singing which sounded in all temples.

The temple has been designed in the modernized Byzantine style by civil engineer B. M. Tustanovsky and was a brilliant sample of an architectural idea.

Erection of the temple began in the autumn of 1930 under the direction of Metropolitan Melety. It was under construction for a decade with constant difficulties and chronic shortage of money. The big assistance to construction of the temple was rendered by chief of BREMa General V. A. Kislitsyn and his assistant M. N. Gordeyev. Even the chief of the Japanese military mission in Harbin General Yanagita has made a generous donation to the temple of Annunciation, having brought for its completion 1000 gobi. As a token of appreciation in business of construction of the temple they were awarded Building committee letters of gratitude and medals (Pecheritsa V.F. Spiritual culture of Russian emigration in China. Vladivostok, 1999. p. 36).

Construction has been completed by 1940. The frescoes of the temple of astounding sizes, lasted more than a year. On September 14, 1941 with a big crowd of people the temple has been solemnly consecrated by Metropolitan Melety and has become an operating church of Harbin.

Metropolitan Melety (Zaborovsky Michael Vasilevich) has been appointed to head the Harbin Orthodox diocese (HOD) after the death of Metropolitan Mefody of Harbin and Manchuria on May 9, 1931.

He was born on July 7/19, 1869 in village Gilevsk of the Tyumen district in the Tobolsk province. The son of archpriest has finished the Tobolsk theological academy, and in 1889 has accepted a rank of priest. When he became a widower, he has entered the Kazan theological academy where in 1898 he became a monk. He has served in Siberia, was the rector of the Tomsk theological seminary and since 1908, becoming a bishop, headed the Barnaul and Yakut faculties. Since 1920 has moved from Chita to Harbin where he lived and worked in Beiguan of the Beijing Spiritual Mission. In 1930 he was consecrated to the rank of archbishop. In 1939 he celebrated half a century of his service for Orthodox Church.

Under the initiative of Metropolitan Melety to fill the ranks of clerics in year 1934 Vladimirs Institute was opened, which he has headed. Heading the board of this theological educational institution there was Bishop Dmitry (Voznesensky). In the beginning the structure of the Vladimir's Institute had three faculties: theological, polytechnic and east-economic, but subsequently only the theological has remained. For preparation of clerics in Harbin with Archbishops Melety help the theological seminary opened in 1938 was also operating. 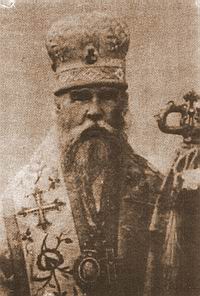 Metropolitan MELETY of
Harbin and Manchuria

There was large charity activities conducted. At the Holy Iveron Church in 1933 they opened St Serafim shelter for boys and old people home. In the same place in 1934 the St Serafim people dining room with free-of-charge dinners for needy has been organized.

Under the management of Metropolitan Melety, the Harbin Diocese has reached the blooming of her economic activities. There were candle factory, a summer residence for beekeeping "Sergievo", gold sewing factory and icon producing workshops, a funeral bureau operated at the Sofia temple. Besides there was an active printing house publishing the magazine Heavenly Bread with a circulation reaching 800 copies. At the Kazan Mother of God male monastery there was a hospital with an ambulance station with name of doctor Kazem-Bek. There was a popular eparchial library founded by Archpriest V. Borisoglebsky. There was continued to operate Harbins musical courses,for musical education of Russian youth. The church everywhere conducted the creative direction and penetrated into needs of Russian population.

It is impossible to agree with the statement, that More than 10 years the Harbin Diocese led by Melety prospered with the support of the Japanese aggressors and further After formation of the management of Manchuria HOD, including the chief of Japanese mission Yanagita the great friend and the patron, has fallen in arms of the Japanese aggressors and actually became the helper to militarists … (Li Shu Xiao Activity of Harbin Orthodox Diocese. The Far East Russia  Northeast China: historical experience of interaction and prospect of cooperation. Materials of the international scientifically-practical conference, devoted to the 60 anniversary of Khabarovsk territory, the 100th anniversary from the date of the beginning of construction KVZhD and the city of Harbin. Khabarovsk, 1998.pages. 172-174). It did not match reality.

As the head of Orthodox Church in Harbin, Metropolitan Melety, sacrificing himself, risking freedom and life, has made an anti-Japanese statement against the order to worship Japanese gods. His inflexibility and firmness in the given question he has expressed in appeal with the message (from the book of Victor Sannikov. Under the sign of a rising sun in Manchuria. Sydney, 1990. pg 105-107):

It was a feat. If earlier the church had indisputable authority this interdiction has caused trust and love of Russian believers who have felt protected.

More than 56 years Bishop Melety stayed in a sacred rank, and he was held everywhere with respect by parishioners. After his repose on April 6, 1946, Metropolitan Melety was buried under the arches of the Church of Annunciation to which he has given care in the remaining years of his life.

The destiny of the temple recognized as one of the most remarkable church architectures created by Russian people in East Asia (Pecheritsa V. F. Spiritual culture of Russian emigration in China. Vladivostok, 1999. pg 36), was tragic. Having existed only 17 years from the date of consecration, it has been closed in 1958. The reason for that was the mass departure of Russian people, for virgin lands of the homeland, and abroad. Having lost parishioners, it stood alone not far from the bank, of gradually receding river …

The local Chinese authorities tried to use the building adapting it for a circus school. Remains of Metropolitan Melety have been profaned (Priest Dionisy Pozdnyaev. Orthodoxy in China, 1998. pg 156). The "Cultural Revolution" has brought the temple to an end, madly behaving crowds demanded that it be demolished. Last icons and church utensils were thoughtlessly burnt on campfires. And in 1970 the pearl among Orthodox temples of Harbin was blown up …

On its place on the road Youyilu (formerly Police Street) they have erected a hotel building "Gloria". It was later written, that the temple has entered into architecture of the hotel, that it was hidden in a concrete box of the hotel, that features of its bell tower were kept.

But, alas, evidence of this does not exist …