Sts Elizabeth, Barbara and the other Alapayevsk Martyrs 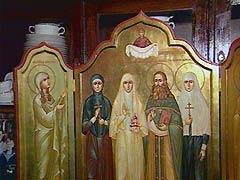 Sts Elizabeth the abbess, Barbara the nun and five other members of the Russian imperial family along with a secretary were taken to a mine in Alapayevsk and were martyred by the Bolsheviks on July 5/18, 1918. Their bodies, with only the body of St Elizabeth remaining incorrupt, were later found by the Russian White Army. Their coffins were taken through Siberia, and then through Hailar at end of February, 1920, into Harbin at beginning of March, and finally into Beijing, China. They were laid to rest in the crypt of the St Seraphim Cemetery Church outside the northeastern city wall of Beijing on April 3/16, 1920. The coffins with the holy relics of Sts Elizabeth and Barbara were later exhumed and sent from Beijing to Tianjin on November 17/30, 1920, departed on November 18 by steamship and arrived in Shanghai on November 21. The coffins departed Shanghai on December 2/15 by sea and arrived in Jerusalem on January 15/28, 1921, and found their final resting place in the crypt at the Church of St Mary Magdalene on the Mount of Olives on Sunday January 17/30.

Copper slab of Sergei
Mikhailovich's coffin
found outside the Mission
on the Russian cemetery, as the
cemetery was being destroyed in 1986.
Coffin made by Boris Kepping,
an artillery officer, and Grand Duke
S. Mikhailovich was Artillery Chief
photo courtesy of B. Kepping's
grandson Boris Aleksandrov

In 1938 during the beginning of China's full-scale war of resistance against Japan, the coffins of the rest of the imperial family that were at St Seraphim Church were also exhumed and transferred to the crypt of the Church of All Holy Martyrs within the city walls of Beijing. They were said to have been secretly transported outside the city wall and reburied at the Russian cemetery in 1947 per order of Soviet Consul General. The Russian Cemetery along with St Seraphim Church was destroyed by the Beijing municipal authorities in 1987, and the former cemetery now serves as a golf course.