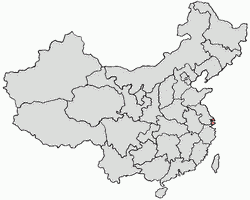 The Mission of Representation of the Russian Orthodox Church in China was formed during the days of Boxer rebellion.

The first parishioners were in the Zháběi Theophany Church around which they united and even tried to settle nearby. In 1939 there was a total of 6 temples. Religious organizations such as the Russian Orthodox Brotherhood and individuals contributed.