PYOTR (Peter) Li Yongan, 27 yrs.; chorister; conducted meteorological observations. On the next day after the destruction of the Mission buildings, i.e., June 2, Peter's house was also plundered. His was a large family living together, primarily women and children. Having lost the shelter, they hid in Fr. Mitrophan's house and in other places. Peter was killed by the Boxers on June 10th in the house of Michael Wen. His corpse was seen pressed down by a thrown beam. Peter's wife Evfimia, 22 yrs., and daughter Artemia (4 yrs), died as martyrs beyond the Dōngzhímén Gate (东直门), near the northern brick factories. And his son Filimon, a 1 year old infant, was thrown by the Boxers there on the road and, probably, picked up by one of the local residents. Maria, 37 yrs old., the wife of Peter's elder brother Matfei Li, with several children, among whom was Fr. Mitrophan's son, Ioann, hid in her mother's home beyond the Dōngzhímén Gate (东直门) in the village Dōngbàhé (东坝河) . But the local residents drove them out. This was on June 2, in the evening. June 3 after midday, beyond the Āndìngmén Gate (安定门), the Boxers seized them and wanted to place them in a cauldron with hot water. But at the time, the government's protection of the Boxers had not yet been announced, and they did not dare kill Christians; moreover, many good people expressed compassion towards the children; therefore the Boxers released Maria with the children. On June 10 she was among those who were surrounded by the Boxers near the Mission site. In the morning of the 11th, Fr. Mitrophan's son Sergy saw her on the Mission site near the well under a tree and tried to convince her to hide. But she showed no fear and calmly spoke to Innokenty Fang. It was here that she accepted a martyr's death. Her body was later found in the well with Innokenty's body -- it is not known whether she was killed with stones in the well, or thrown there after being killed. Maria's two daughters -- Anisia (14 yrs) and Melania (3 yrs.) probably burned in Father Mitrophan's house. 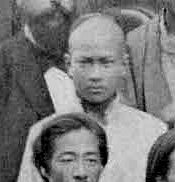 An Albazinian, ALEXANDRA Li, 32 yrs, widow, sister of the catechist, Paul; her deceased husband Evmeny, brother of Peter Li, had assisted Archimandrite Flavian with translations. Alexandra had esteemed her husband as Sarah had Abraham. On the evening of June 10, she was among those surrounded by the Boxers in Fr. Mitrophan's house and did not want to seek safety in flight. When the Boxers broke down a door, she was probably one of the first to be killed. The Boxers burned her with torches, so that her whole body broke apart. Her body lay to the right side of Fr. Mitrophan's body. Alexandra's two daughters -- Artemia, 15 yrs. and Evdokia, 12 yrs. -- probably were also burned to death in Fr. Mitrophan's house.