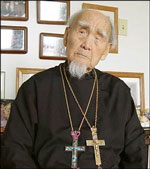 On 19 November, the eldest clergyman of the Russian Orthodox Church Outside of Russia, Protopresbyter Elias Wen, turns 107.

Fr. Elias was born in China in 1896. At the age of seven, he converted to Orthodoxy at the Chinese Orthodox Mission in Peking. From 1905 until 1925, he studied at the Mission school, and in 1916 at the Mission seminary. Fr. Elias was ordained into the deaconate in 1924, and the priesthood in 1931. From 1946 on, he was the rector of the Cathedral of the Most-Holy Mother of God "Surety of Sinners," built by Saint John (Maximovitch) in Shanghai.

In 1949, Fr. Elias was forced to leave China because the communists came to power. He served in Hong Kong from 1949 until 1957, then moved to San Francisco, where he has been a staff clergyman of the Cathedral of the Mother of God "Joy of All Who Sorrow."

Until the age of 100, Fr. Elias conducted all Sunday and holiday services at the Cathedral, and sang on the kliros daily, morning and evening. It has been difficult for Fr. Elias to make the trip to the Cathedral the last few years, so the Cathedral clergy visits him and administers the Holy Mysteries to him at home. Fr. Elias walks unaided, his mind is sound, but he has difficulty with his sight and hearing.

In the words of Fr. Elias, the greatest punishment for him is being unable to sing on the kliros on a daily basis.