SIAN, China A recent discovery - according to the local is old news near the city of Sian, in Central China has dramatically changed the historical record of China and Asia.

Asia with China and Japan in particular are thought of as predominately Buddhist areas. The record of the Church is very limited throughout Asia with the exception of The Philippines and Korea.

As amazing as it may seem the oldest Christian site in Asia has been discovered dating back to 638 AD. The site which is near the ancient Chinese capital of Sian has shattered previous understanding of the role of Christianity in China, Japan and Asia.

The Nestorian Monument, a stone tablet in the city of Sian which was discovered in the 1600s was the only testimony to Christianity in China. What was always a puzzle was that it clearly stated that `monasteries abound in a hundred cities`. This monument which is often called the `Rosetta Stone` of Christianity in Asia was the only proof of this past.

The discovery of the Christian site has dramatically changed all this. The Church is in the center of the Imperial area of the Tang Dynasty and its location is what is particularly bringing amazement to experts on the Silk Road. With the Church in the center of the imperial area it confirms for the first time the stories that have long been passed down and appear frequently in Chinese narratives which tell of a major Church in China in the Tang Dynasty from 618-877.

According to The Cross and The Lotus by Lee Shiu Keung in 635, Bishop Alopen from The Church of the East began his mission in Chang Ang, present day Sian. Christianity had first come to China in the year 64 when the Apostl Thomas came to Sian, China from India where he had come in the year 52. Other believers are believed to have brought the gospel on to Japan by the year 70 AD.

In 630, however the Silk Road was restored and travel between the East and the West resumed. The Tang Dynasty was a very special period in Chinese history where there was a broad policy of tolerance and interest in fostering foreign religions., In 638 Alopen completed the first Christian book in Chinese The Sutra of Jesus the Messiah.

In this book it was carefully argued that Christianity was part of China's ancient tradition. In appreciation for the good of the Eastern Christians an Imperial Degree was proclaimed that provided for the first building of a Church. Later on The Church of the East was favored by another Imperial degree and Alopen was promoted to be Great Spiritual Lord, Protector of the Empire, Metropolitan of Chang An.

The Church encountered ups and downs but following a period of persecution falling the fall of the Tang Dynasty grew again in the 13th and 14th Centuries and were again so respected by the Emperor that according to the ancient Chinese document the Yuan Shi, Chapter 89, the Governor appointed a special officer to take charge of the affairs of the Church of the East with the second high-test rank in China.

This office was solely to manage the affairs of the many bishops, priests, monks and to see that ll the sacraments were carefully observed. According to the Yuan Shi there were 72 Church of the East monasteries during the period 1289 to 1320 not to mention the multitude of churches and believers.

What happened? With the complete restoration of the Silk Road in the 13th Century Pope Nicholas IV sent John of Montecorvino to the Chinese court. The Priests of The Churhc of the East in the Imperial Court and the Franciscan`s did no get along . One agaoin under the Mongols there was a period of great religious toleration. This was again a period of great growth for the Churchi n China but this again came to an end in 1369 when communications with the world were cut off with the decline of the Mongol Empire.

This hitherto almost unknown period in the Church in China and Asia testify to the great growth of the Church.

What does this mean today? According to staff of the Keikyo Institute, which works to establish the proper Christian History in Asia the recent discovery has two main points.

First, it completely alters the previously thought ideas about Asia in particular China and neighboring Japan. Previously it was thought that Christianity was a small part of the picture but with the recent discovery of a Church in the center of the Imperial Compound it can be clearly said that Christianity as it clearly stated in the Nestorian Monument was a central part of China at that time and there were Churches throughout China and Asia.

Second, is that it clearly puts Eastern Christianity as a `Chinese` and `Asian` religion. Particularly with an asia that is very conscious of the Colonial eras in which the conquering was doing in the name of Western Christianity this indigenous form of Christianity which although properly Christian was very democratic is recombined and admired.

Two recent trips by staff from the Keikyo Institute to the site and other sites nearby were very surprising. When informed of the fact that they were trying to find out information about the Church of the East officials, the media were surprisingly positive. 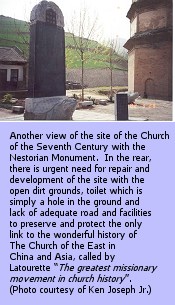 Rev. Harald Bredesen, longtime Christian minister to World Leaders was asked spontaneously to speak in a Church a short distance from the ancient Church and the service went on to an instantly ordered full house for over an hour.

Of particular concern, though is history. There have been many discoveries of remains of the wonderful times of the Church in China and Asia along the ancient Silk Road but in every instance the sites and artifacts have disappeared.

The Keikyo Institute along with others are trying to raise funds to be able to donate to the site and accompanying Museum so it can be refurbished to accept pilgrims and visitors. According to Rev. Harald Bredesen who recently visited the site `It is critical that we be able to present a gift so the site can be repaired so that the Christian tradition of the site will remain. If we fail at this critical moment to support this tremendous discovery it may as in the past be forever lost and the grand tradition of the Church as well`.

Why, some ask is it so important to find history? The answer is quite simple. In Asia history counts. To present individuals and whole areas with a gospel that has no connection with them is extremely difficult but to present the gospel to them as the faith of their fathers calling them not to accept a new religion but to `go back` is completely; different.

Further, while many countries in the regions actively discourage `western religions` The Church of the East is clearly an `ancient` and `Asian` religion and it enjoys great support and respect.

Belong China is what according to staff at The Keikyo Institute may be even more amazing. The name of the Church discovered in Sian China is the same as the oldest Temple in Kyoto, Japan which has a site within its former premises from the Church of the East.

It appears quite clear that the oldest Temple in the `buddhist` city of Kyoto used to be a Church.

These amazing discoveries according to Dr. Bredesen I believe are not by accident and are so that the people of the last major unreached part of the world - Asia can come to Christ - not a Christ with whom they have no connection but a Christ who whey once loved.

The prayer of hundreds of years are inherited in these people there now. Within the area of the newly discovered Church are another 10 Churches and the fervor of the people that packed into the church within just a few minutes to listen to the messages were great testimony to the fact that the faith that was thought to be `western` in fact was `eastern` when Europe was still barbarian.

It points to the simple fact that when Jesus commanded the disciples to go to the `ends of the earth` they went and the gospel was proclaimed and the Church grew to India in 51, China in 64 AD, Japan estimated about 70 AD and throughout the world.

The proclamation of the Gospel to those who have `never heard` as opposed to those who are descended from those who once knew brings the dual blessings of pride in ones past as well as the inherited prayers of generations gone previously. 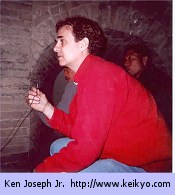 Ken Joseph Jr. is author of a recently published book called "Japan: The Nation of the Cross" which explains the Christian history of Japan and Asia. In 1951 Joseph's parents were some of the thousands who answered Gen. Douglas MacArthur's call for missionaries to go to Japan to help it recover from World War II.

Traveling with them on the same ship to Japan was a Japanese newspaper editor. When he learned the Josephs' ancestors were from Assyria he told them that people from that land had come to Japan more than 1,400 years ago, bringing medicine, freedom and democracy. These were Nestorian Christians who had settled in Japan by the 5th century.

Joseph was once highly skeptical of his father's story, but after years of research he has found it to be true. Just months ago Joseph published "Jijika no Kuni, Nihon" (Japan: The Nation of the Cross), which is selling well in Japanese secular bookstores. He hopes to publish it soon in English.

The Keikyo Institute is working to raise an immediate $100,000 to provide for the development and protection of the only Christian site in China and development of an ongoing find to preserve this and other Christian sites to be outposts of the faith in the most unreached part of the world in China, Japan and other parts of asia.

In addition, special tours are available which will keep a steady stream of Christians visiting the sites making sure they are preserved and the precious history of the Church of the East continues.